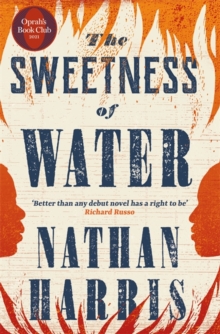 Is your pile of books that you’re waiting to read that sometimes you lose track of what’s on it? Guilty.

I was looking at it to see what to read next when I suddenly spotted two books on the Booker longlist that I’ve not read yet – and I’m not sure why – especially considering one of them was one I’d specifically requested.

That was the Sweetness of Water by Nathan Harris.

In the dying days of the American Civil War, newly freed brothers Landry and Prentiss find themselves cast into the world without a penny to their names. Forced to hide out in the woods near their former Georgia plantation, they’re soon discovered by the land’s owner, George Walker, a man still reeling from the loss of his son in the war. When the brothers begin to live and work on George’s farm, the tentative bonds of trust and union begin to blossom between the strangers.

But this sanctuary survives on a knife’s edge, and it isn’t long before the inhabitants of the nearby town of Old Ox react with fury at the alliances being formed only a few miles away . . .

This is set at the end of the American Civil War – and slaves were being freed, becoming known as Freedmen.

At the time, whilst they were being freed, many of them stayed on to work where they’d been slaves because they didn’t know anything more. And if they were paid, they were paid nothing compared to a white man.

So, while there was this end to slavery, there wasn’t an end to the inequality.

I’ve read a few books set during the slave trade – perhaps the most recent being The Prophets – and this almost feels like a sequel, despite it being by a different writer.

The Prophets was about slavery and two young enslaved men, while The Sweetness of Water is about two young men who have been ‘freed’.

George Walker lives on a farm, which is nothing more than scraps of land, he’s not really farming it. It’s all been inherited and he occasionally sells parts of it to Ezra in the town of Old Ox.

His and Isabelle’s son has been drafted into the war, so they’re now living alone – until one day, Caleb’s childhood best friend August comes to their home to tell them that Caleb has died.

August has been injured, though George notices that it doesn’t seem to be that pronounced, and we’re led to believe that August’s rich father was able to pay for him to be kept in a place of safety during the fighting.

George and Isabelle go into mourning, in different ways. George wanders the woodlands and he meets Prentice and Landry – who have recently left a neighbouring farm, some of the only freedmen who have left.

They’re distrustful of George, but he suggest that they come and work for him, because he’s suddenly had this idea to turn some of his fields into turning some of his land into a peanut farm. He’s ploughing his grief energy into something else.

Prentice is initially wary of working for another white man, but George reassures him that they’ll be working together and lets them stay in his barn. He promises them that when they want to heard north for their new life, they can.

Landry, on the other hand, is very silent. He doesn’t speak after some quite barbaric treatment.

This is a story of grief, of working out how to move on from one part of your life to another.

I liked that we saw it from various points of view – Caleb, Isabelle, George, Prentice and Landry all get their own section. I liked that it reminded me that when slavery ended, it didn’t just end and there was this wonderful happy ending.

People aren’t happy that George is paying these two black men as much as he is, because they’re worried others will get the same idea. Because while they might not be slaves, they’re certainly paid a lot less than other workers.

Paranoia starts going around the town of Old Ox – the description of which made me think of the frontier town of Dr Quinn Medicine Woman. Everything seems to be fairly relaxed and everyone does their own thing – particularly the sheriff who is more interested in people’s wallets than justice.

A LOT happens in Sweetness of Water – too much for me to reveal. It takes on a lot of characters, a lot of subjects and is still incredibly well written.

The lasting thought that I had from this book was about people’s descendants. A family’s legacy is an important theme, and it’s really obvious in George and Isabelle as they remember and mourn Caleb, as they think about what they’ve inherited from their own parents.

Also Prentice and Landry are thinking about their own futures, but their primary goal is to try and find their mother. Then there’s August and his father and what becomes of them throughout the story.

This talk about the generational shift made me think about how some people were able to just move on from this period and within a generation the atrocities that were done by white people – by their grandparents – were forgotten.

And yet the stuff done to these slaves reverberates through the generations, because even if things are getting better there is still that pain there.

After the likes of Prentice and Landry were freed, they still weren’t equal in law for another hundred years or so, so any children they might have had were still born into some kind of bondage.

This isn’t very long ago, embarrassingly, only four or five generations ago. My grandparents’ grandparents would have been around the time of the American Civil war. They were alive when this was happening.

This book made me remember it, gave me more of an insight into what’s happening and really begin to understand how those people feel.

It’s important for us to remember. When one side of history has lived with this pain for generations and other sides have just forgotten about it there will never be reparation.

It was nice to see Prentice and Landry become part of George and Isabelle’s family as their lives move on and to see the Walker family’s standing within their town change as they did was truly enlightening.