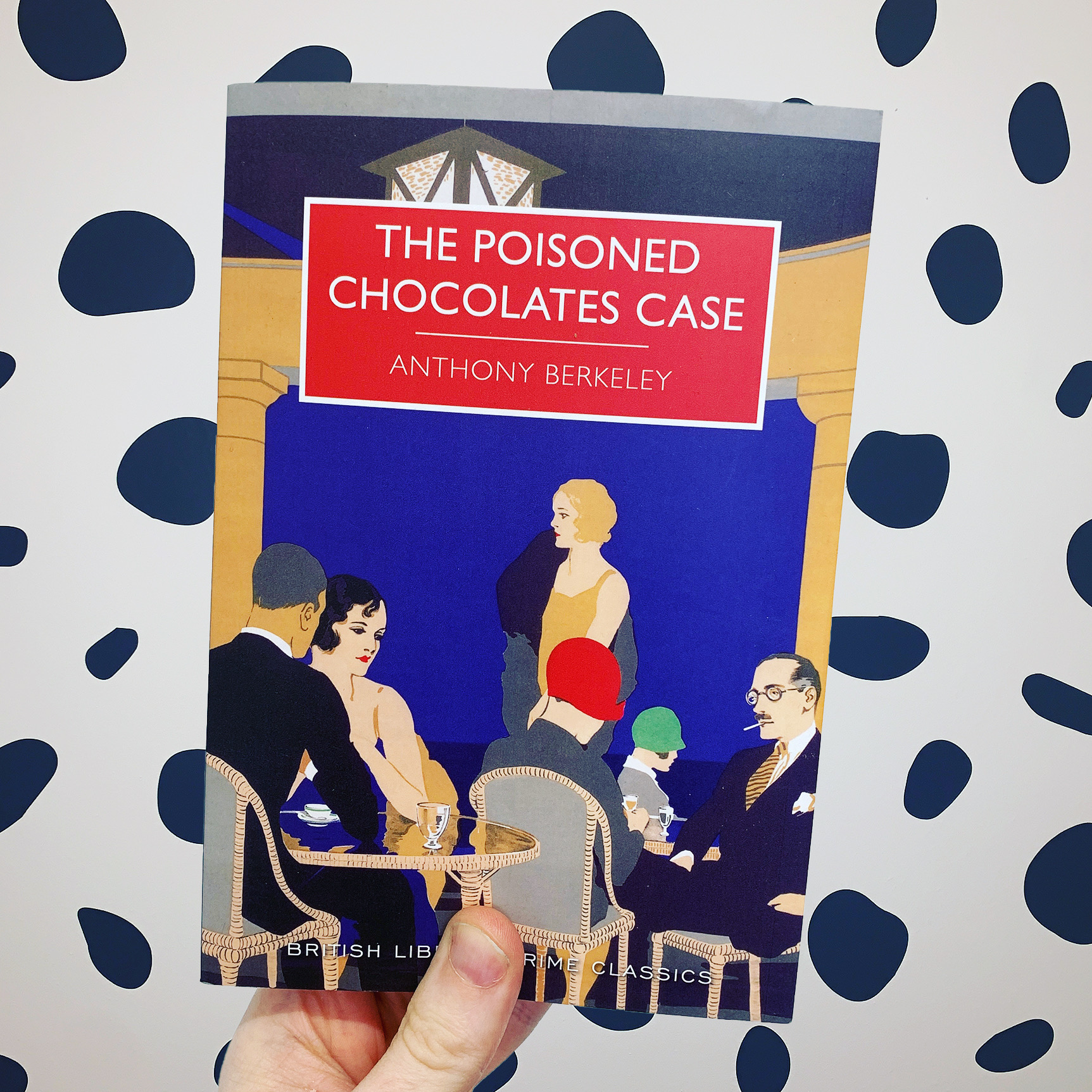 For my birthday this year, I actually received a book. I never get books!

And I’ve not read much classic crime, so I was pleased to get a copy of The Poisoned Chocolates Case by Anthony Berkeley.

This British Library comes with an introduction from Classic Crime expert Martin Edwards – as well as two additional endings – one by Christianna Brand from a few decades ago, and one by Edwards himself.

Graham and Joan Bendix have apparently succeeded in making that eighth wonder of the modern world, a happy marriage. And into the middle of it there drops, like a clap of thunder, a box of chocolates.Joan Bendix is killed by a poisoned box of liqueur chocolates that cannot have been intended for her to eat. The police investigation rapidly reaches a dead end.

Chief Inspector Moresby calls on Roger Sheringham and his Crimes Circle – six amateur but intrepid detectives – to consider the case. The evidence is laid before the Circle and the members take it in turn to offer a solution. Each is more convincing than the last, slowly filling in the pieces of the puzzle, until the dazzling conclusion.

My understanding is that Roger Sheringham appears in a few novels, but this one is unique, in that it all takes place in the meeting room of these six characters.

They’re met there by Inspector Moresby who tells the members of the Circle (and the reader) the details of the case.

Graham Bendix belongs to a gentleman’s club, he heads there one morning about ten-thirty and he meets Sir Eustace Pennefather – you get the vibe of an older man, I pictured Colonel Mustard, but he’s perhaps not as old as that.

As Bendix walks in, Sir Eustace receives a delivery – a promotional box of chocolates, that the company wants Pennefather to give some good comments to. He’s not that fussed and chats to Graham.

It’s clear they don’t know each other well, but Graham reveals that he lost a bet with his wife over the murderer in a play – and he owes her a box of chocolates. Pennefather gives him the box he’s received.

Over lunch, Graham and Joan share the chocolates – though not equally as Graham only has a couple. Back in the club that afternoon, he falls ill – but his wife dies at home. The chocolates were poisoned!

Who did it, who were they targeting and how did they do it?

The police have reached a dead end, because the confectioners claim not to send these sort of promotional boxes…

The members of the Crime circle all come up with theories and present them to each other over subsequent nights.

The premise is that those who do work out crimes in fiction are kind of cheating – they say things in a certain way which causes the reader – and the other characters to take something as fact, which may just be a supposition.

A lot of crime novels from that period, they’re often ended with a murderer cracking under the pressure of an accusation, rather than the detective solving the crimes with a hundred per cent water tight accuracy. They nearly always rely on a confession.

This is foreshadowed by the bet between Joan and Graham – Joan cheated at guessing the murderer, having seen the play before, it wasn’t an act of deduction, it was one of deception!

The characters in the crime circle are a mix of other people, amateurs, playwrights, QCs. Each come at the case from different perspectives, and prove beyond reasonable doubt who the murderer is – until someone points out a hole in the theory.

It continues to build until Sheringham knows who the murderer is – and then his theory is blown out of the water.

The final reveal (by Berkeley) is well done – but subtle. It doesn’t quite give you a hundred per cent proof, but it leaves you beyond reasonable doubt.

Then the additional endings – the first one by Christianna Brand. It doesn’t work for me. It does in terms of the plot, but it doesn’t fit the style.

This book is very classically written – the style of spiffing Enid Blyton language and Brand doesn’t quite capture it. Plus, it takes the action out of the crime circle and introduces us to a character who wasn’t really foreshadowed before.

Then Martin Edwards ending comes in and this one worked much better for me. It carries on from Brand’s ending – they all flow into each other and work as one book, but this provides a more satisfactory solution – than either Brand’s or Berkeley’s.

Berkeley was trying to say ‘there is always doubt’ and his ending does leave you with that, but Edwards ends up saying ‘here’s what actually happened, and why’ and it’s ok with that.

But it’s a matter of professional pride that Moresby is the one who solves the crime – with a little bit of luck. This ties in with the theme that detectives who solve these crimes, always seem to be a little bit lucky. They’re not necessarily geniuses – they’re better at spotting connections – but sometimes luck just drops something in their laps.

And it makes you think about crime fiction and detective fiction particularly all the more – especially as throughout this book you’re presented with possible solutions – all making several assumptions.

As a reader, you’re aware that more solutions will be made and so you read the theories, but start to come up with reasons why the theory presented isn’t correct – they haven’t addressed what a particular character’s motivations might be, what there actions were.

The ones I spotted did eventually get addressed – so it was interesting for me to see where it was subsequently going to go.

I recently read The Paper Palace – and in the acknowledgements, Miranda Cowley Heller states that every book has a beginning, middle and end, with the ending foreshadowed in the beginning.

I think that’s why the first two ‘endings’ of this book, don’t work for me. They weren’t necessarily foreshadowed, while the final ending does have some links back to the very beginning, and it’s something all the characters – and myself – overlooked.

And I think that’s what’s satisfying for a reader – coming up with your own theory, but then it gets disproved – or there’s a simple solution that you haven’t considered.