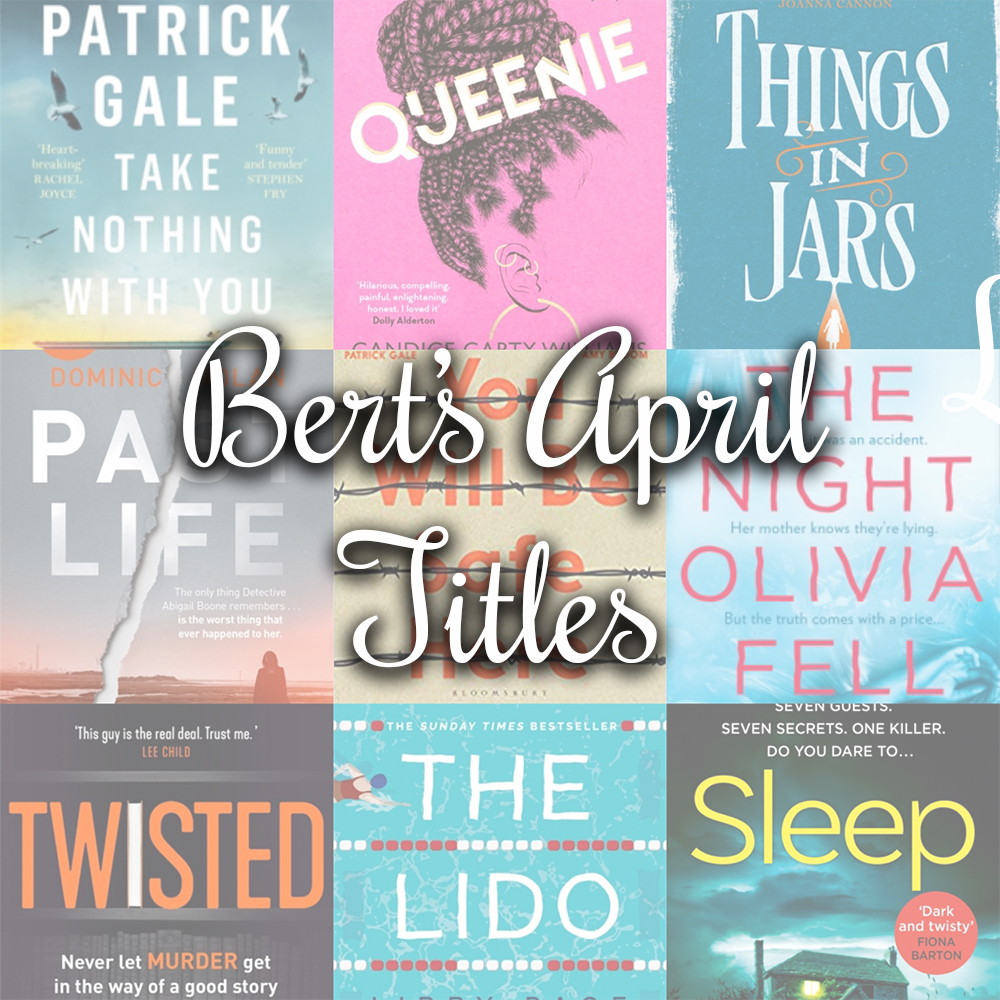 We’ve got some great treats for you this month – those of you have signed up for bundles will be receiving books from the list below.

If you haven’t signed up for a bundle – why not do it now to guarantee your delivery of great books for May? Not only do you get £5 off your first month, but we don’t charge any delivery costs either.

Starting with Bert’s Best Books – we’ve got two cracking novels, both of which you’ll be seeing a lot about in the coming weeks.

You Will Be Safe Here – Damian Barr

Every month as well as picking two favourites from ALL the books, Bert picks one of those two be our Book of the Month – Damian Barr’s debut novel is that book.

It starts in the last days of what is now known as the Gentleman’s war – the Boer War in South Africa. We follow Sarah van der Waat as she is taken from her home and placed in a concentration camp by the British. These camps would go on to become the blueprint for the Nazi concentration camps – and what happened in those camps had a lasting effect on South Africa that is still being felt today.

As well as Sarah’s story, we move forward through the history of South Africa as we learn just how that war shaped the country today.

Diana Athill put it best by saying ‘You come out of reading it a different person from when you went in’.

A truly brilliant read that will stay with you long after you put it down.

Queenie is a very different kind of novel to Barr’s – but it also stays with you after reading as well.

navigate her way through a mini-crisis of self. Who is she? Where does she belong in this world? Does she even like herself?

In short, she’s suffering from all the things we all suffer from, but for Bert it was the insights into her views on race that really made this book. It’s not the big moments, but the small ones, ones where we, the reader, offended on her behalf but Queenie simply shrugs them off as normal.

It might help you see society in a new way – or it will feel horribly familiar. Either way, it will make Queenie feel so vivid and real – you’ll be rooting for her all the way through.

Queenie is published on 11th April, so subscribers to the Bert’s Best Books bundle will receive their books week commencing 8th April 2019.

As well as Bert’s Best Books – Queenie also features in our Proud to be Different Bun
dle it is a startling insight into the life of a young black woman – but it’s not all about her race. It’s about a young woman growing up with all the challenges of life around her.

Take Nothing With You – Patrick Gale

We would normally try to avoid putting a paperback into this bundle, but as it’s our first month we couldn’t resist shouting about this brilliant book and the way it explores the youth of our protagonist Eustace.

He’s growing up different in 1970’s Weston-Super-Mare – and he has to face all the challenges of growing up alongside trying to work out what these differences are.

But there are moments of Eustace’s older life which frame the younger years which are just as touching.

Patrick Gale is one of our favourite writers here at Bert’s and we mean no disrespect to his previous novels when we say we think this is one of his best yet.

There are moments of Eustace’s childhood which most men – straight or gay – will be able to identify with – but the sections where he describes playing the cello are surprisingly moving and among the highlights of a book filled with special moments.

Queenie is published on 11th April, so subscribers to the Proud to be Different bundle will receive their books week commencing 8th April 2019.

Patrick Gale’s Take Nothing With You is another book that is featured in more than one bundle – it’s also in our General Fiction paperbacks – it really is that good!

The Lido is a story about a young journalist and an old lady trying to save Brockwell Lido from developers doesn’t sound particularly likely at first – but it’s a great piece and a really nice commentary on loneliness in all its forms.

It also explores the changing nature of community – when Rosemary was young, her community were her friends and family who lived around her.

Fast forward to the modern day and both Rosemary and Kate are isolated, not really a part of any physical community as such, but as they start to work on saving the Lido, they find out that community hasn’t disappeared, it’s just changed a bit.

Page does a brilliant job of bringing the reader into the community that she creates as well. Ultimately, it’s a lovely, uplifting read.

The General Fiction paperback bundle is on its way to subscribers now.

It would be a crime if we didn’t include Bert’s Book of the Month so You Will Be Safe Here by Damian Barr also features here – alongside another fab book:

Those of you who like your fiction a little less serious, a little bit more quirky, will love this novel from Jess Kidd – the bestselling author of Himself. It follows Bridie Devine – the most famous female detective of the Victorian era.

She’s fresh off one case that’s gone quite badly wrong, and now determined to do better on her mysterious new case – a girl kidnapped from her father, who seems to have strange abilities.

Bridie is joined by her seven-foot servant Cora and the ghost of an Irish boxer – Ruby Doyle. Somehow, Kidd makes all of this seem very believable and very real.

The General Fiction Hardback bundle is on its way to subscribers now.

The first of Crime and Thriller hardbacks follows Abigail Boone – a woman who wakes up in a room that is barely a room. She is being held prisoner and remembers nothing of how she got there, or even who she is.

After managing to escape Boone must put her life back together, even if she can’t
remember it.

Discharged from the police force, living with a husband she can’t remember loving and a son she doesn’t remember giving birth to, she decides that the only way to try and start rebuilding her memories is to resume investigating the case she was following before her capture.

The disappearance of a young woman, now missing for five years.

Anna is suffering from a chronic lack of sleep – and when she does get sleep, she’s besieged by night terrors and horrible flashbacks to events she wishes she could forget.

Moving to the Isle of Rum in Scotland to avoid her past, she takes a job working in a hotel, where she is joined by seven guests – each of whom has their own secret. One of them appears to be out for murder, targeting Anna.

The Crime and Thriller Hardback bundle will be dispatched in the week commencing 1st April.

From the bestselling author of Thirteen – this is one of those books you just have to read. It’s received a huge amount of critical acclaim including from C L Taylor – the author of

one of our Hardback titles

So what’s it’s about? We don’t want to give too much away – so we’ll just give you the blurb on this one:

BEFORE YOU READ THIS BOOK I WANT YOU TO KNOW THREE THINGS:

1. The police are looking to charge me with murder.

3. If you think you’ve found me. I’m coming for you next.

Our final book of April is this thriller from a debut author.

The titular Olivia is the daughter of Abi Knight who wakes one night to a phone call from the local hospital with terrible news. Olivia has fallen from a bridge and is now in a critical condition on life support.

We follow the story in two time frames, from Olivia’s point of view in the run up to the accident, and from Abi’s as she tries to find out just what happened on the bridge that fateful night.

A read that you will struggle to put down, early on you will think you know where this is going, but trust us, you don’t.

The Crime and Thriller Paperback bundle will be dispatched in the week commencing 1st April.