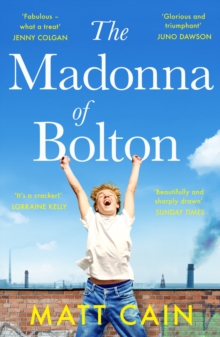 When I was starting Bert’s Books The Madonna of Bolton was one of the books that I had in my mind.

I’d read it, it was excellent and yet Matt was turned down by thirty publishers because the book was ‘too gay’.

It’s really not. I’ve read much gayer books – but they’re usually confined to the heavy tomes written by writers who suck on pipes and win the Booker.

If The Madonna of Bolton – the fastest funded book on Unbound – isn’t reaching the hands of the every day customer, how many other books aren’t I thought?

You know the rest – but the reason I’m talking about it today is that this week sees the publication of The Madonna of Bolton in paperback you can buy it on Bert’s, of course, but if you want to know more about how Matt ticks, here in his own words he explains ten important books from his life – handily, most of them are available to order by clicking on the links.

The Lion, the Witch and the Wardrobe by CS Lewis

My mum first read this to me, my brother and sister when we were little and I was completely blown away. Over the next few years I must have read it myself at least ten more times. Because I was a camp, girly boy living in a rough northern town I never really fit in and had a horrible time at school. There were times I was so unhappy I would have loved nothing better than being whisked away to a fantasy world like Narnia, where I was a king and everyone loved me. I think that’s why the book made such an impact on me.

When I was a teenager I fell in love with learning different languages; I think that again part of the appeal here was escaping reality and transforming myself into a slightly different person. The first novels I read in French were by Marcel Pagnol and I loved them all, although this, the story of a young boy who bonds with his dad on hunting trips around their holiday home in Provence, is the first one that really drew me in. The films are lovely too.

I was at sixth-form college when Sex was released in 1992 and my obsession with Madonna was at its height; as an outspoken ally of the LGBT community and a sexually confident woman whose insistence on expressing her desires labelled her a fellow outsider, I elected her as my spirit guide. Sex was a coffee-table book of explicit images exploring Madonna’s sexual fantasies that was shot by photographer Steven Meisel. The project represented the most transgressive move of Madonna’s career and saw most mainstream media outlets align against her for the first time. But this didn’t stop the limited edition of 150,000 sealed, aluminium-backed copies from selling out on the first day. I was struck by Madonna’s bravery as a feminist and the defiantly queer tone of much of the book, as well as the beauty and power of some of the imagery.

When I went to Cambridge to study French and Spanish literature, I found myself forced to read countless novels that I found really hard going. But I did fall in love with the work of Flaubert, Balzac, Zola and Gide in French, and Gabriel García Márquez, Isabel Allende, Mario Vargas Llosa and Manuel Puig in Spanish. One of my favourite novels on the reading list was Fortunata y Jacinta by Benito Pérez Galdós, which was written in 1887 and tells the interlinking stories of two women of different classes living in Madrid. The book is bitingly critical of the class snobbery and sexism of the time and I loved it. When I spent a year living in Madrid between 1996 and 1997, I re-read it and would often stroll around the streets where it’s set bringing the characters to life in my mind.

By the time I left Cambridge, being forced to read and analyse so many worthy, academic books had pretty much killed all the joy I used to find in reading. That summer I went on holiday with two girlfriends and we each read a Jackie Collins. I picked up Hollywood Wives and within minutes I was drooling, gasping and giggling out loud on the beach. After years of feeling like my batteries had run out, it was as if somebody had switched me back on again. I’ve since read several of Jackie’s books and love her colourful characters, energetic plotting, and the intoxicating cocktail of humour, glamour and sex that she serves up every time.

When I started my career in TV arts programming, Jackie Collins was one of the writers I was lucky enough to interview – and over the years I’ve also had the opportunity to interview or work with David Mitchell, Alan Hollinghurst, Ian McEwan, Rose Tremain, Jonathan Harvey and Barbara Kingsolver. But one of the first authors I interviewed for TV was Sebastian Faulks, whose World War 1 epic Birdsong is one of my favourite books of all time and was the first to reduce me to tears. Meeting its author made me see writers as real people and writing itself as something that maybe I too could do one day.

During the eight years I spent making documentaries for The South Bank Show, I worked with several amazing artists, including Carol Ann Duffy, Ewan McGregor, Darcey Bussell and Ian McKellen, each of whom inspired me in different ways to draw on my own creativity. But my early attempts at writing fiction were rejected by countless agents and publishers, something which left me feeling devastated. Then, in 2006, I made a documentary with Claire Tomalin about her biography of Thomas Hardy. I’d always loved Claire Tomalin’s work; although her biographies are impeccably researched, they read like freely-imagined fiction. And I was hooked on her latest when I discovered that, like me, Hardy was devastated when his first novel had been rejected for publication – and even when he’d achieved success, his work was often derided by critics. I went on to devour all of Hardy’s novels before setting off to shoot the documentary on location in Dorset and Cornwall, where I spent a wonderful few weeks that inspired me to keep writing and not to give up on my dream.

One Day by David Nicholls

I love this book so much that I don’t think I could ever be friends with someone, and I certainly couldn’t fall in love with someone, if they didn’t feel the same way about it. If you’re one of the few people who hasn’t read it, it tells a twenty-year love story through a series of set-piece scenes taking place on the same day at yearly intervals. I read it when I was writing my first novel Shot Through the Heart, when I’d been single for ages and needed switching back on to romance so I could make my own fictional love story come alive. One Day delivered exactly what I was looking for – and a whole lot more besides. It’s a book that has been written with such sensitivity and humanity I think it has the power to make everyone who reads it a better person.

The Song of Achilles by Madeline Miller

Between 2010 and 2013 I worked as Culture Editor on Channel 4 News, reporting on all areas of the arts. During my time in the role I was lucky enough to meet even more amazing artists working in various fields, such as Grayson Perry, Pedro Almodóvar and the Spice Girls, but I made sure I devoted a lot of attention to stories about writers and the publishing industry as I was trying to use my position to finally secure a book deal for my own fiction. While covering the Orange Prize (now the Women’s Prize) I interviewed the author Madeline Miller, who’d just re-worked the Greek mythology in Homer’s The Iliad to create the gay love story at the heart of that year’s winning novel, The Song of Achilles. I don’t think you’ll ever read a more beautiful account of romantic, lustful and intimate love – gay or straight. I felt stunned after I’d read it – and was relieved to find that its author wasn’t just clever and talented but adorable and friendly too.

Tales of the City by Armistead Maupin

This series of novels set in San Francisco burst into life in the mid-1970s and they’re a riotous romp through the interlinking stories of several ‘gay, straight and travelling’ characters from different backgrounds, many of them tenants of 28 Barbary Lane, a boarding house run by transgender landlady Mrs Madrigal. It was while working as Editor-in-Chief of Attitude, the UK’s biggest-selling magazine for gay men, that I went to San Francisco to shoot and interview author Armistead Maupin. The experience was one of the things that inspired me to dig out my manuscript for The Madonna of Bolton, a novel I’d written that had been rejected by over thirty publishers who considered its gay content and central character ‘uncommercial’. I wanted to prove them wrong – and that’s when I decided to crowdfund the novel through Unbound and attempt to raise the funds in record time. I succeeded in seven days and this helped secure a mainstream release for the novel. It became a bestseller in hardback last year and attracted some very positive reviews – and now I can’t wait for it to be released in paperback!