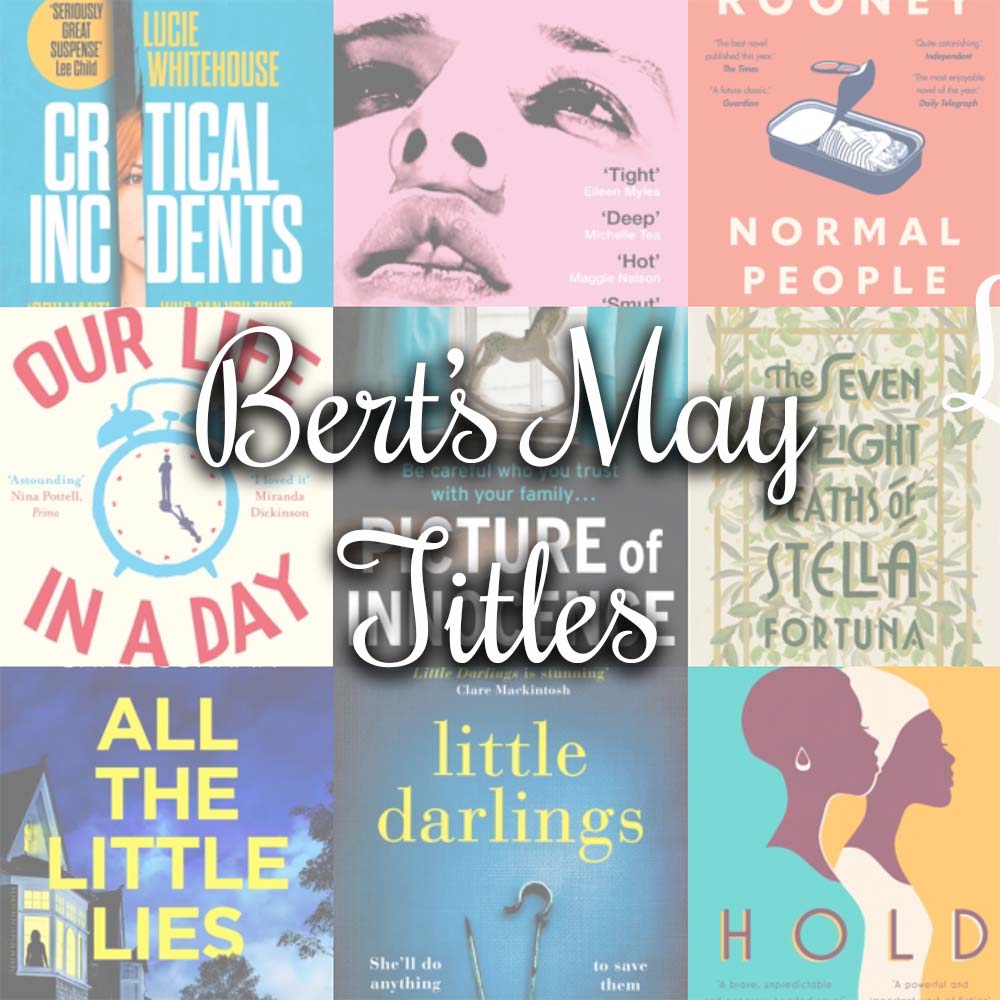 It’s time to reveal the titles included in the bundles for May.

If you’re looking at these and feeling a bit jealous that you’re not getting them sent to you, then sign up before the end of May to ensure you get your bundles in June.

Use code BUDDY5 to get £5 off your first month!

Starting with Bert’s Best Books – I’ve got two brilliant novels – both of which are also available in the General Fiction hardback bundle too!

Paul takes the form of a mortal girl by Andrea Lawlor – Bert’s Book of the Month!

I didn’t really like Paul takes the form of a mortal girl to start with – which is a funny thing to say as I’m now billing it as my book of the month! I found Paul quite unlikeable, but after about fifty pages or so, I was glad I stuck with it. The writing is top notch, and you really start to care about Paul – even if you don’t really like him…!

Paul is a shapeshifter. He changes his height, his hair colour even his gender to suit his mood as well as those around him.

He is confident in who he is, but then he falls in love and he starts to question everything. It’s a brilliant metaphor for a young person trying to find their way in the world and one of those books I’ll struggle to forget.

The Seven or Eight Deaths of Stella Fortuna by Juliet Grames

brushes with death she has. One of the brushes is a distant brush so hard to know whether it counts, hence the title.

To understand Stella’s life, though, you must first understand that of her mother Assunta. Through her we learn about life in their village in the hills of Italy, and of Stella’s early life.

In fact, the stories of Assunta and Stella – spanning more than a hundred years – serve as a social history of Italian-Americans and in a way reminded me of Alan Hollinghurst’s The Sparsholt Affair but better.

nd the Costa Book of the Year.

It was also longlisted for the Women’s Prize for Fiction 2019 – so what makes it such a great book?

Rooney is one of the best young writers around and her energy shows in this novel of boy meets girl, bringing to it a believable look at what it means to be growing up in the modern era.

Connell and Marianne are in the same year at school, but they’re very different. For a start Connell’s mother is Marianne’s family cleaner. They don’t have much to do with each other apart from that, but one day, when Connell comes to meet his mother from work, that all changes.

We follow their lives and their on again off again romance through the years, as they both grow and learn to be who they’re meant to be.

We meet Tom and Esme on the night of their tenth anniversary. Esme has created a game for Tom to play – he has to p
ick the defining moments of their relationship from the past ten years – one for each hour of the day.

The book moves back and forth through time as Tom picks each of the moments that means something to them.

It’s definitely one of my books of the year – not only is a wonderful love story, but it explores male mental health, a subject that is currently not talked about enough.

Picture of Innocence by TJ Stimson

Maddie is a busy woman – not only is she looking after three children but she’s also running a charity too. She’s just about keeping it all together on the outside – but a tragedy is set to send her whole life spiralling out of control

One of her children has been hurt – and she starts to suspect everyone of being responsible, even herself!

All the Little Lies by Chris Curran

All the Little Lies is a brilliant thriller full of untrustworthy characters. It all kicks off when Eve receives an email with details the details of her birth mother.

Eve had always known she was adopted, but learning that her mother Stella was killed in a house fire in Italy is new information.

Told from alternating points of view as Eve investigates what really happened to Stella, we get to see it first hand from Stella’s point of view as events build to an unpredictable climax.

born twins have been taken by a strange a woman.

It starts when Lauren is on the maternity ward overnight and she sees an old looking woman lurking behind a curtain. She is chased into the bathroom and from there she rings for help… but no one believes her.

Only one person believes her, DS Joanna Harper.

Apart from the plot, one thing I liked about this book was that Harper is a bisexual woman, pursuing a relationship with another woman – and no one bats an eyelid. It’s not made a fuss of – and it’s things like this I want to see more of in fiction. Diverse characters where their difference isn’t driving the plot.

both her personal and professional life is in tatters. She’s been kicked out of the force she’s single and she’s sharing a bunk-bed with her daughter in her parent’s house.

When her best friend’s husband becomes the prime suspect in a murder she takes it on herself to investigate, but things are further complicated when she discovers the detective actually in charge of the case is her teenage sweetheart.

As well as the dark suspense you’d expect from a crime novel, the characters in this book feel real – all of which means you shouldn’t start this book before bed, else you might be up all night!

It’ll come as no surprise that my book of the month Paul takes the form of a mortal girl is the first title in this bundle, but what’s the second?

Hold starts off in Ghana with Belinda, a seventeen year old housemaid for a couple she knows as Uncle and Aunty. She has to break the news to her co-worker young Mary that she is leaving, being sent with Nana to live in London.

Mary doesn’t want her to go, but Belinda must and there she meets Amma, Nana’s teenage daughter.

The two young women are very different, from very different worlds but they start to form a bond in this beautiful novel. Donkor manages to capture real life so well, that you find yourself laughing at Belinda’s wry observations one moment to worrying for her the next.